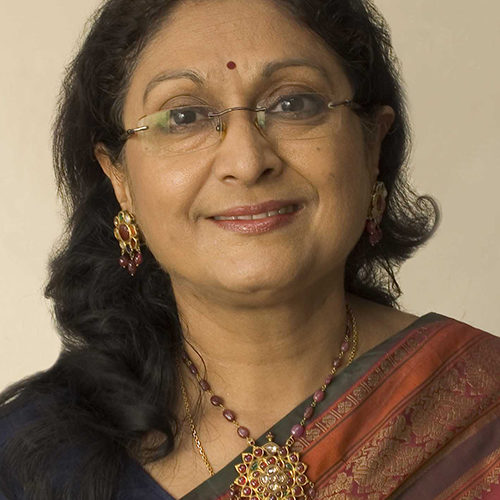 A brilliant colorist, Nayanaa Kanodia, an economist turned painter, is considered to be the pioneer of l’Art Naïf in India, a genre until then unseen and unheard of in a contemporary context. She has since established a rare niche for herself in this very particular mode.
Having won the National Scholarship of the Government of India, she completed her graduation from Lady Shri Ram College, New Delhi with an Honours Degree in Economics. Nayanaa is an entirely self-taught artist except for a year-long apprenticeship with Anjolie Ela Menon – one of India’s leading contemporary artists. Having had a French leave of absenteeism from formal training in art enabled Nayanaa Kanodia to bring patterns of strong individualism into her work long before it was considered a redefining approach for unique and contemporary artists of today. This also guided Nayanaa Kanodia to avoid the hierarchy of the artworld labels, such as a ‘high’ and ‘lowbrow’, and to present the dynamics of social reality in the concrete frames of virtuality.
In 1998 she was chosen from among artists of all The Commonwealth Countries by The Commonwealth Institute to have a solo show to inaugurate their newly renovated Complex in London. Based on the contribution she had made to L’Art Naïf she was invited by the world renowned Victoria and Albert Museum in London in 2001 to demonstrate her painting techniques and exhibit her paintings in the gallery. What is more, she is the first Indian whose paintings are part of Paintings in Hospitals collection. Her works are permanently displayed at Musée d’Art Naïf Max Fourny – Halle Saint Pierre in Montmartre in Paris. Impressed by the social messages being conveyed in her paintings, a consortium of schools in Los Altos, USA, is using her work as a medium of instruction to their students. Nayanaa’s paintings feature in a recently published international book ‘Women in Art’ by Reinhard Fuchs. Nayanaa considers it a great honour to be selected amongst the world’s most talented female artists. She was also honoured with an award by Megh Mandal Sansthan, Ministry of Culture, Govt. of India in 2016. She has conducted numerous Art Camps in India and abroad – Bangkok, Cambodia, London, Moscow, St. Petersburg, multiple cities in Italy, Athens, Mykonos in Greece as well as Finland, Norway, Sweden. She has a teaching experience of two decades and is on the faculty of Spic Macay International. She gives talks and presentations on art in prestigious organizations and universities. In addition, she is a judge in many Art Events, Art Fairs and Art Competitions.